I use Docker to manage deployments for my applications and, up until April of 2016, I was using Docker Hub as the registry for all of my images. If you have public images, I recommend this route. However, if you have images that need to be kept private (as I do for my client work) you’ll need to pay for the service and it can get quite pricey for many repositories. Thankfully, Docker’s registry is open-sourced and the Docker organization has done a fantastic job of documenting the process to host your own registry. But, if you deploy to AWS, there is an even easier way…

In December of 2015 AWS announced that their Container Registery (ECR) was generally available (in AWS terms, “generally” means “us-east-1”). In March of 2016 they opened up the service to us-west-2. This is the region that I deploy my applications on, so I was finally able to make the switch to a managed registry. AWS’s pricing for this service is crazy cheap:

Obviously, YMMV, but I’ve never had these costs add up to more than a dollar, per-month.

AWS provisions a registry for you when you create your first ECR repository. If you are asking yourself, “wait, what’s the difference between a registry and a repository” like I was, this stackoverflow post is for you. So, the AWS registry is analagous to Docker Hub and repositories are how your images (and their tags) are organized within the registry. Here is the list of my public repositories on Docker Hub: 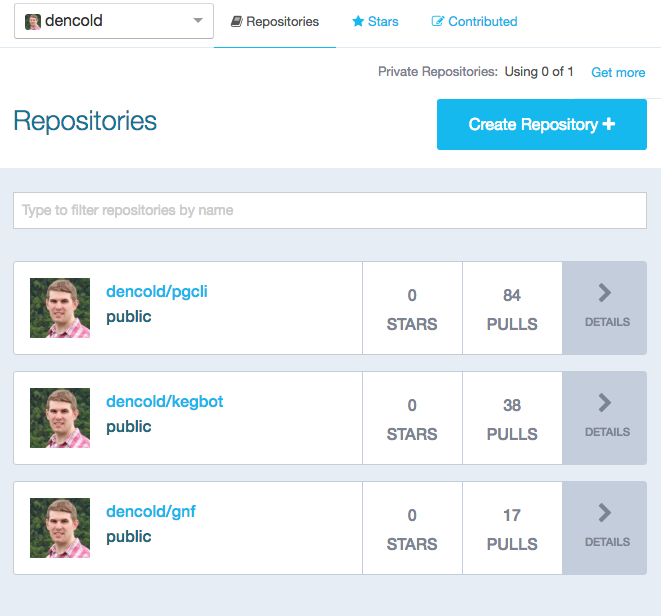 Okay, enough background. Let’s get your first repository setup. First, I prefer to do my AWS provisioning using their excellent aws-cli tool. If you haven’t done so already, make sure to install the tool via instructions on their site. Additionally, make sure you’ve run the aws configure command and provided an access key that has admin privilages.

For this example, I’m going to show you how I would take my public pgcli repository and bring it over to my private AWS instance.

You’re done! If you login to your AWS console and click on the “Repositories” section of Amazon ECS, you should see it listed:

If you drill into the detail page by clicking on the repository name you should see that the hash checksum matches the output from our push:

You can pull down images from your registry from any host. Only prequisites:

To pull down that image we pushed in the last step, you’d just need to run:

One disapointment is that AWS gives you no way to name your registry (e.g. 000042290000.dkr.ecr.us-west-2.amazonaws.com) into something a little friendlier, like registry.yourdomain.com. Since there is no way to associate your own TLS certificate with the registry, you’ll get certificate errors if you try to CNAME the host:

This has been raised on the following AWS form post. Hopefully it is something AWS will support in the future.